Learning mathematics can be made simple. It all depends how you approach the subject. Once you bring in the fun element, then learning any subject is easy. This was the point of discussion at the ‘Fun Maths and Mind Games’ programme by T. R. Jothilingam, an expert in number games. “Why should people hate Mathematics? Is it not the subject that makes your brain active?” he asked and assured how inadequacies could be addressed to get rid of the strong dislike for the subject among students.

Is maths fun? There may be some who reply positively but it bears a dull reputation among many others. But if the numbers are interspersed in puzzles and mind games, it is sure to kindle interest amongst children. Encouraging children to approach the subject with ease is what station master T.R. Jothilingam does. He has a passion for the mind games, puzzles, Sudoku and more. He began to deal with numbers a decade ago and set up his first magic square then. As he dealt more with them he found a great satisfaction in completing them. He has set up odd number magic squares, 4×4 magic square (total 34), special magic squares, an upside down magic square (it is a magic square when turned to 180 degrees gives the same total of 24) and a Palindrome magic square (a number when read from left to right or right to left is the same).

A large number of students of various schools of Tiruchi and neighbouring districts had a unique experience when T.R. Jothilingam, a wizard with numbers from Madurai, taught Mathematics in an innovative method during the special programme ‘Fun Math and Mind Game’ held in Tiruchi recently.

T.R.Jothilingam, a station master by profession but is a real master of numbers. He lives in a world of numbers. The Station Master at Madurai Railway Junction, T.R.Jothilingam’s fascination for numbers is so much that most of the time you .nd him bent over pieces of paper, pen in hand and solving mathematical puzzles. 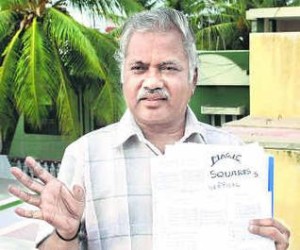